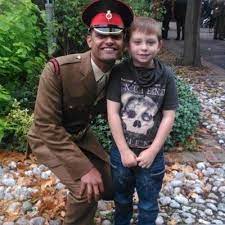 Who was Michael Joseph Miah ?

Gunnery Jaysley-Louise Beck was found tragically dead at the base in Larkhill, Wiltshire on December 15.

She died the same day as Lance Corporal Michael Joseph Miah, 28, of the Household Cavalry, who was found dead in her garage in Bulford.

How old was Michael Joseph Miah ?

The military has launched an investigation into the deaths, which come after at least five confirmed suicides on Salisbury Plain since 2018.

Gunner Beck had completed his initial training at the Army Foundation College in Harrogate before continuing his military career at Larkhill in 2020.

His family, who live in Oxen Park in Yorkshire, said he could “light up a room by putting a smile on anyone’s face”.

In a sent tribute, they said: ‘Jaysley is a loving and caring person who would go out of her way to help anyone in a less fortunate position than herself.

‘If there is ever a person who needs help, you can always count on Jaze to be there.

“His compassion for others and his ability to light up a room by putting a smile on anyone’s face is immeasurable.”

The Army has confirmed that an investigation into Gunner Beck’s death is underway.

A spokesperson said: “It is with sadness that we confirm the death of Gunner Jaysley-Louise Beck in Larkhill in December 2021.

“Given ongoing investigations, it would be inappropriate to comment further, but any death is a tragedy and our condolences go out to the families and friends of those affected.”

An inquest into Gunner Beck’s death is scheduled to take place at a later date.

The tragic deaths, just 10 days before Christmas, come after at least five confirmed suicides on Salisbury Plain (pictured) since 2018.
Lance Corporal Miah was found dead the same day as her. Both died by hanging, according to their post-mortem examinations.

As part of her legacy, her family is asking for donations to The Principle Trust Children’s Charity.

“We think this charity exudes the kind of positivity that Jaysley always had in helping kids give back their dreams,” the family said.

“100 per cent of every pound raised by the charity goes to help provide free holidays to disadvantaged, deprived and disabled children across Yorkshire.”