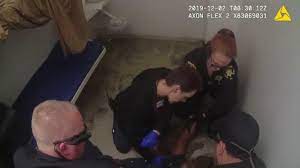 A grand jury has indicted a nurse on one count of involuntary manslaughter in the 2019 death of a black man at a North Carolina jail, but has declined to indict five former detention officers involved in the incident.

Forsyth County District Attorney Jim O’Neill confirmed that Michelle Heughins, who worked as a nurse at the county jail, was charged Monday in the death of John Neville, which sparked protests throughout the summer of 2020, the media reported.

Authorities said Neville fell from his bunk after suffering from an unknown medical condition and staff moved him to an observation cell. An autopsy report revealed that Neville died from a brain injury after he was restrained.

Neville’s death sparked protests in the city of Winston-Salem in August 2020. Forsyth County Sheriff Bobby Kimbrough announced that the department has banned bent-leg restraints, a tactic jail staff used on Neville. before he died.

Stay with News 2 for more updates on this story.