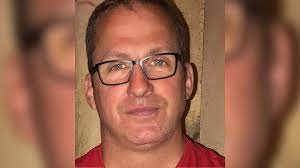 The family of a Manchester United fan fatally assaulted outside a Benidorm bar have made a heartfelt appeal to find his killer.

Mike Rydings, 48, from Wythenshawe, Manchester, died in August 2019, more than a year after he was attacked in Spain.

He had traveled to celebrate a friend’s 50th birthday and watch the 2018 World Cup soccer tournament when he was involved in an altercation in the early hours of June 23 with a group of up to six men.

Spanish authorities conducted investigations into the incident outside the Hippodrome bar in Benidorm Square, but no offenders have been brought to justice.

Detectives from Greater Manchester Police spoke to more than a dozen English tourists from around the country who were there that night.

One line of investigation is that the group involved in the altercation may have been from the UK, although this is not certain.

The man suspected of assaulting the construction worker, Mr. Rydings, is described as white, in his 20s and 30s, with a larger than average build and between 5ft 7in and 6ft. He was possibly wearing camouflage clothing.

Mr. Rydings was unconscious in a local hospital for a month due to injuries he sustained from falling to the ground.

He was repatriated to Salford Royal Hospital and was unable to speak, move or breathe without assistance before he died on 11 August 2019.

In a joint statement released Sunday, Rydings’ daughter, Hayley Barker, and her sister, Nikki Howard, said: “Mike was a father, grandfather, son, brother, nephew, cousin and friend to many.

“Mike was full of energy, the life and soul of the party, a joker, generous to a fault, enjoying all aspects of life and that of his beloved Manchester United.

‘Someone somewhere knows who this person is. were you with him? Is it your friend or partner? All Mike’s family and friends want is justice for him. The person who did this is still living a full life, but he could repeat this attack on a member of your family and change your life forever.

“We as a family have a big hole that can and will never be filled. Mike has already missed a lot and will continue to do so, which we cannot change. But we can change the fact that he died without justice.

“Please let the police know if he has any information, no matter how small you think it may be.”

Detective Inspector Nicola McCulloch said: “While the investigation into the murder in Spain has been unsuccessful, we remain determined to do everything we can to get the answers Mike’s loved ones crave for the upcoming investigation of him.”

“This has led us to speak with more than a dozen men and women who were in Benidorm at that time, many of whom remember much of what happened that night despite the passage of time and that encourages us that someone out there know who did it. this to Mike and he is able to tell us.

“There is a suggestion that the group involved in the altercation was from the UK but this is not certain and it is therefore vital that anyone who can recall any information about who may have been involved contact us knowing they could prove to be very significant.

Anyone with information is asked to contact the Major Incidents Team on 0161 856 6777 quoting Operation Thurston.

Details can be passed anonymously to the independent charity Crimestoppers on 0800 555 111.