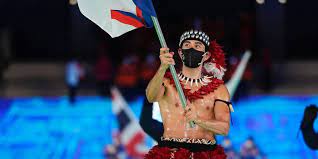 Who is Nathan Crumpton ?

The Tongan flag bearer, whose bare, oiled chest won hearts around the world at the Rio 2016 Summer Olympics, was not physically present at today’s opening ceremony in Beijing.

Yet he was there in spirit when 36-year-old Nathan Crumpton of the American Samoa team, bare-chested and oiled, carried the flag in temperatures of 23F (-5C) at Beijing’s National Stadium.

There have been over 300 tweets for the term ‘American Samoa Flag Bearer’ today as snapshots of the athlete flooded people’s timelines during the opening ceremony.

The Kenyan-born athlete started bobsleighing in 2011, after watching the 2010 Olympics.

Mr. Crumpton’s Team USA biography says he “pays the bills with his modeling work and talent” and describes him as an “avid skier, snowboarder, mountain biker and longboarder.”

He is also an award winning photographer and is ‘represented in the David Pfau Photo Gallery in Breckenridge, Colorado’.

Twitter praised Crumpton for showing off the frigid temperatures as the athlete stepped out with little more than a layer of baby oil to protect his pecs from the cold.

Another user said: “A big shout out to Nathan Crumpton who represents American Samoa for taking on 24F.”

“Serve one for the flag bearer of American Samoa, who is definitely not dressed for the weather,” another comment added.

Other comments called the athlete ‘brave’ and ‘bold’.