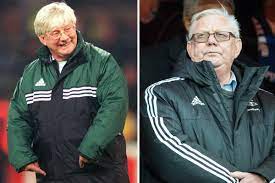 Who was Nils Arne Eggen ?

LEGENDARY Norwegian coach Nils Arne Eggen has passed away at the age of 80.

The former Rosenborg and Norway national team coach is one of his country’s biggest football icons.

He managed for 45 years and the longevity of him was something to behold.

During his time with the club, he won a remarkable 14 league titles and six Norwegian Cups, while also qualifying for the Champions League.

And Eggen also took charge of Norway between 1974 and 1977, narrowly missing out on qualifying for the 1978 World Cup.

He won the Norwegian Coach of the Year award seven times, all in the 1990s.

“The ‘Sir Alex’ of Rosenborg who triumphed in the Champions League with almost only ‘homegrown’ players.

“A fantastic personality that I loved being around. RIP.”

And Rosenborg BK also paid tribute to their former manager with a statement that read: “It is with sadness that Rosenborg received the message today that the club’s greatest legend is dead.

“Nils Arne slept peacefully into Wednesday night with his immediate family by his side.”

Eggen also enjoyed a playing career before establishing himself as an elite coach.

And during his first title as a player, he was also named the division’s Player of the Year.