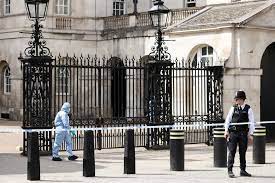 A mentally ill man accused of attacking police armed with a kitchen knife on Horse Guards Parade narrowly escaped being shot to death because the officer “forgot to take the safety off his gun”, a court heard today.

Suspected knife-maker Prashanth Kandhaiah, 29, is accused of confronting two Ministry of Defense police officers at the site of the annual Trooping the Color meeting in Whitehall, London, at around 8.50am yesterday.

The suspect allegedly tried to stab one of the officers, who fell to the ground, before he was tasered and restrained, a court heard.

Wearing a gray prison t-shirt, Kandhaiah appeared before Westminster Magistrates’ Court today charged with attempting to cause serious bodily injury with intent and possession of a sharp object.

Defending, Richard Craven told the court: ‘He [Kandhaiah] is schizophrenic, he takes medication for that. He gave a long and detailed interview to the police. He explained that he is in a lot of pain from various ailments.

“The officer attempted to shoot the defendant and pulled the trigger twice, but since he is a newer model Glock, he has double safety. He forgot to unlock the rear.

If it hadn’t been for that, he would be dead.

Prosecutor Rose Edwin said: “Two uniformed officers were on static patrol when the defendant ran towards them with a kitchen knife. He attempted to stab an officer who fell to the ground. The officer had to kick repeatedly to prevent the defendant from stabbing him.

He ‘he was able to stick out his side arm and point it at the defendant, but he was not dissuaded. The defendant continued to draw the knife towards him.

“The attack only stopped when the second officer pulled the Taser on him and shot the defendant and was able to subdue him.”

Kandhaiah, from Thamesmead, southeast London, was taken into custody ahead of a preliminary hearing at Southwark Crown Court on May 17.

Earlier, a Met Police spokesman said: “An investigation has been launched following an incident on Horse Guards Parade in Westminster on Monday morning.”

‘Around 8:50 am, a 29-year-old man, who was armed with a knife, was confronted by two MoD police officers. A taser was deployed and officers restrained the man. There were no reports of injuries.

He was arrested on suspicion of attempted murder and possession of an offensive weapon and remains in custody at a central London police station. The incident is not being treated as terrorism related.

‘An investigation is underway. Met officials will continue to be in close contact with MoD Police as it progresses.’

Several government buildings, including the main Ministry of Defense building, are located in Horse Guards, as well as army barracks.

Shortly before 2:30 p.m. m., the police reopened Whitehall to traffic and pedestrians and the only sign of what happened was a blue tape outside the Horse Guards entrance.

A waitress at Caffe Concerto, which is close to the scene, said: “We had only been open for an hour or so and had a few customers for breakfast when the police came in and told everyone to stay inside.”

“They just said there had been an incident and it was safer to stay inside, but ten minutes later they came back and told us all to leave because there was a suspicious package.”