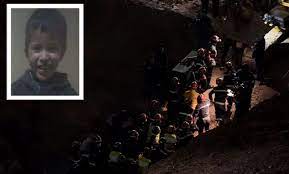 Who was Rayan Oram ?

The body of a 5-year-old Moroccan boy trapped in a 104-foot dry well for more than four days was pulled out on Saturday after an arduous but ultimately unsuccessful rescue effort shocked the world.

Hundreds of spectators erupted in cheers, applause and prayers as doctors carried the boy, Rayan Oram, on a red stretcher through a cordon of Moroccan police and soldiers to a waiting ambulance. His parents were waiting nearby.

But minutes after the dramatic extraction, the royal palace said in a statement to state media that the boy had died before rescuers could save him. Moroccan King Mohammed VI called to offer condolences to his parents, Khaled Oram and Wassima Kharchich.

The palace said the king closely followed the rescue efforts, “instructing officials to use all necessary means to remove the boy from the well and return him alive to his parents.” Mohammed praised the rescuers for their tireless work and the community for their support of Rayan’s family.

Previously, rescuers had warned that they were unable to determine the boy’s condition as they worked to remove him.

The news of Rayan’s death was heartbreaking, not only for the parents, the rescuers who worked for days and the crowd at the scene, but also for millions of people around the world who were engrossed in the tense drama being broadcast on I live from the small town in the north of Morocco. of Ighran.

It was unclear exactly when Rayan died. Images taken with a camera sent down the well earlier in the week showed Rayan gasping for breath, with blood on his face. Rescuers also lowered food and water to the boy during the days it took to get him out, but it was not known if he was able to eat or drink while he was underground.

Rescuers needed days of round-the-clock effort to reach the boy, who fell into the well on Tuesday while his father was working in the well. Attempts to retrieve it the way it fell were unsuccessful because the pit, about 18 inches wide at ground level, narrowed to about 8 inches about 75 feet deep and took a turn near the bottom.

Bulldozers were brought in to excavate much of the hillside next to the well, creating a huge trench running parallel to the well. Workers then had to dig a horizontal tunnel through the rocky and sandy soil to connect to the well where the boy was trapped and extract him. The meticulous work was repeatedly slowed down by heavy rocks and fears of landslides, including a section of hard rock that took about five hours to clear, rescue committee chief Abdelhadi Temrani told local media.

The final hours of the delicate operation required workers to dig very slowly and by hand to avoid a cave-in that could have buried the boy. An engineer told a local TV channel that they were digging only 20 centimeters, or about 7 inches, per hour.

The town of about 500 people in Morocco’s Rif Mountains is dotted with deep wells, most of which have protective covers. They are often used to irrigate the cannabis crop that provides a key source of income for many in the poor and arid region.