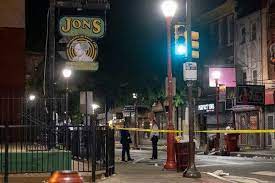 Who is Robert E. Crimo III ?

A 22-year-old man identified as a person of interest in a shooting during an Independence Day parade in suburban Chicago that killed at least six people, wounded at least 30 and caused hundreds to flee was arrested Thursday. Monday night after an hour. pursuit, police said.

Highland Park Police Chief Lou Jogmen said Monday night that a police officer briefly chased Robert E. Crimo III as he drove about five miles north of where the shooting occurred before the man pulled over and was arrested.

Police declined to immediately identify Crimo as a suspect, but said identifying him as a person of interest, sharing his name and other information publicly was a serious step.

The July 4 shooting was just the latest to break the rituals of American life. Schools, churches, grocery stores, and now community parades have become killing fields in recent months. This time, the bloodshed came as the nation tried to find reasons to celebrate its founding and the ties that still hold it together.

“It is devastating that a celebration of America has been shattered by our unique American plague,” said Illinois Governor J.B. Pritzker, at a press conference.

“I’m furious that it doesn’t have to be this way…While we celebrate the 4th of July only once a year, mass shootings have become a weekly, yes, weekly American tradition.”

The shooting occurred at a location on the parade route where many residents had staked out vantage points earlier in the day for the annual celebration. Dozens of bullets fired sent hundreds of parade goers, some visibly bloodied, to flee. They left behind a trail of abandoned items that showed daily life suddenly and violently interrupted: a half-eaten bag of potato chips; a box of chocolate chip cookies spilled out on the grass; a child’s Chicago Cubs cap.

Ominous signs of a joyous event suddenly turning to horror filled both sides of Central Avenue where the shooting occurred. Dozens of baby strollers, some bearing American flags, abandoned children’s bicycles and a helmet adorned with images of Cinderella were left behind. Blankets, lawn chairs, coffee and water bottles were knocked over as people fled.

“There is no safe place,” said Barbara Harte, 73, of Highland Park, who had stayed away from the parade fearing a mass shooting but then ventured out of her home.

Crimo was taken to the Highland Park Police Department for questioning about his possible involvement.

His vehicle was seen in North Chicago around 6:30 p.m. m. and officers attempted to stop him before he sped away, leading to a short chase before he stopped.

He was taken into custody “without incident,” according to police. His charges are pending as police continue to investigate.

It is reported that he was driving a silver 2010 Honda Fit with license plate: IL DM80653.

Lake County Major Crimes Task Force spokesman Christopher Covelli told a news conference that “several of the deceased victims” died at the scene and one was taken to a hospital and died there. Police have not released details about the victims or injuries.

Lake County Coroner Jennifer Banek said all five people killed in the parade were adults, but she had no information on the sixth victim who was taken to a hospital and died there. One of those killed was a Mexican citizen, Roberto Velasco, Mexico’s director of North American affairs, said on Twitter Monday. He said two other Mexicans were injured.

The NorthShore University Health Center received 26 patients after the attack. All but one had gunshot wounds, said Dr. Brigham Temple, medical director of emergency preparedness. Their ages ranged from 8 to 85, and Temple estimated that four or five patients were children.

Temple said 19 of them have been treated and released. Others were transferred to other hospitals, while two patients, in stable condition, remained at Highland Park Hospital.

The shooter opened fire around 10:15 a.m., when the parade was three-quarters full, authorities said.

President Joe Biden released a statement following the tragic event, saying he has been in contact with the mayor of Highland and the governor of Illinois.

“Jill and I are shocked by the senseless gun violence that has once again brought pain to an American community on this Independence Day.

“As always, we are grateful for the first responders and law enforcement on the scene. I spoke with Governor Pritzker and Mayor Rotering, and offered the full support of the federal government to their communities.

“I also asked the federal police to assist in the urgent search for the shooter, who remains at large at this time.

“Community members should follow the guidance of leadership on the ground, and I will closely monitor them as we learn more about those whose lives have been lost and pray for those who are in hospital with serious injuries,” he added.

Illinois Rep. Brad Schneider tweeted that he and his team were gathered at the beginning of the parade route when the shooting started.

“Hearing on loss of life and other injuries,” Schneider tweeted.