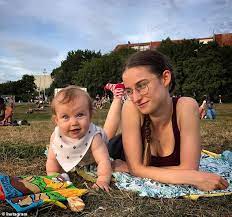 Who was Ruby Auster ?

A 10-month-old girl in Brooklyn has died from a combination of fentanyl and heroin, and her 44-year-old father, Daniel Auster, son of famed novelist Paul Auster, has been charged in her death, police said.

The girl, Ruby Auster, was found unresponsive Nov. 1 at a home on Bergen Street in Park Slope, Brooklyn, and was pronounced dead at a hospital, police said. The medical examiner’s office later determined that she died of “acute intoxication” from the drugs, police said.

Mr. Auster was charged with involuntary manslaughter and criminally negligent homicide after consulting with the district attorney’s office, police said. Information about Auster’s attorney was not immediately available.

Outside the Bergen Street row house on Saturday, two neighbors said Auster and his partner were friendly as they walked with their baby. But one fall day, a jumble of baby supplies — clothes, books, and toys — washed up on the sidewalk, and neighbors learned the baby had died.

The medical examiner’s office declined to comment on how the baby was exposed to the drugs, citing the ongoing investigation.

In 1996, Daniel Auster played a minor role in a notorious nightlife murder case, in which club promoter Michael Alig and an accomplice killed and dismembered a drug dealer, Andrew Melendez, also known as Angel, and they dumped his body into the Hudson River.

Mr. Auster pleaded guilty in 1998 to possessing $3,000 that had been stolen from Mr. Melendez and was sentenced to probation. He was not involved in the murder.

A police spokesman confirmed that the Daniel Auster charged in Ruby Auster’s death had been arrested in 1998 on charges of possession of stolen property and that the charges were linked to a murder charge against Mr. Alig.

Mr. Auster’s father, Paul Auster, is one of New York City’s foremost novelists, author of “City of Glass” and “4 3 2 1,” among many bestsellers. He declined to comment when contacted by phone on Saturday.

In 2003, Daniel Auster’s stepmother, Siri Hustvedt, published a novel, “What I Loved,” in which a character is a drug addict and is eventually arrested in connection with the murder of a drug dealer. In Paul Auster’s 2003 novel “Oracle Night,” the narrator is a writer whose son is a drug addict.