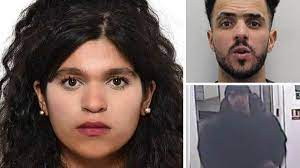 Police have arrested the 22-year-old boyfriend of a City University student who was found dead with serious neck injuries in his London hallways.

Maher Maaroufe was arrested this afternoon in Clerkenwell on suspicion of murder and assault on police.

Sabita Thanwani, a British national, died at Arbor House on Sebastian Street after she was found with serious neck injuries, police said.

Detectives launched a manhunt in an attempt to track down Maaroufe, who they believe had been in a relationship with Sabita.

The Met Police have released a CCTV image of Maher in student accommodation on Saturday morning.

The Tunisian national, who is not a student, is known to travel to and have links in London and Cambridgeshire. Police say he has since shaved his head and beard.

Police said that although formal identification has not yet taken place, Sabita’s family has been informed and is supported by specialist officers.

A special post-mortem examination will be arranged in due course.

Detective Chief Inspector Linda Bradley, who is leading the investigation, said: “I would like to thank everyone for publicizing and sharing our call to track down Maaroufe.”

A City, University of London spokesperson said: “As a university, we will do everything we can to support our students and staff and will continue to fully support the police with their investigation.”

‘We are working closely with Unite Students who own and operate Arbor House.’

Sabita’s family has been brought up to date with this development and continues to be supported by specially trained officers. Our deepest condolences are with them.

“I would ask everyone to respect their privacy at this unspeakably devastating time for them as they come to terms with Sabita’s murder.”

Officers were first called at around 5:10am on Saturday, due to reports of a woman injured at Arbor House, a student accommodation on Sebastian Street, Clerkenwell.

London Ambulance Service and officers attended and found Sabita, believed to be a psychology student at City, University of London, seriously injured.

Despite the efforts of the emergency services, the 19-year-old was pronounced dead at the scene.

The 19-year-old woman, who was reportedly a freshman, is believed to have been killed on the fifth floor of an apartment block owned by Unite Students.