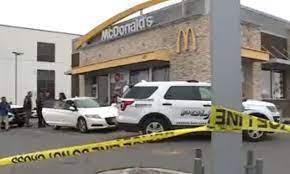 Police said a 4-year-old boy fired a gun at officers on his father’s orders Monday at a McDonald’s in Midvale.

According to the Unified Police Department, the incident occurred at 425 West 7200 South. A man identified as Sadaat Johnson, 27, in a Honda allegedly brandished a gun at restaurant workers after they gave him the wrong order.

The workers called the police after telling Johnson they would fix his request.

When police arrived, they were able to locate and remove Johnson from the vehicle. However, once Johnson was outside, an officer noticed “a firearm coming out of the vehicle,” according to UPD Sheriff Rosie Rivera. The officer was able to deflect the weapon, which discharged into a restaurant awning.

Police identified the person who fired the gun as a 4-year-old boy who was allegedly told by his father to fire the gun. The boy was in the back seat of the car with his three-year-old brother.

“Every officer that is here today just can’t believe it. We are beyond believing that something like this could happen,” Rivera said.

Officers did not respond after the boy fired the gun.

“This campaign against the police, this has to stop. We are here to protect and serve, and this is getting out of hand,” Rivera said. “This is a kid who thought it was okay for him to pull out a gun and shoot the police. He had never seen anything like this in my 28 years.”

Although the officer was able to deflect the firearm, he received a small wound to his arm.

Johnson was arrested and faces charges of child abuse and threatening to use a dangerous weapon.

Child and family psychologist Dr. Douglas Goldsmith said shootings like this are not common. He said that children usually tend to react more timidly when they see their parents under arrest.

Goldsmith said that young children model what they see and what they are taught at home.

“An older child can take a moment to say, ‘I’m not going to shoot the police,’” he explained. “The four-year-old would not think, ‘This is a very bad choice.’ No. The child would think: ‘Dad is suffering. Dad told me to do this. I will do it.'”

Investigators are working with the Division of Children and Family Services to make sure the four- and three-year-olds are in good hands.