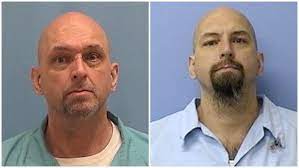 Who is Scott Eby?

Scott Eby pleaded guilty to five counts of first-degree murder in the death of Riley Fox and one count of predatory criminal sexual assault of a child and was sentenced to life in prison without the possibility of parole, according to a press release from Will. County state attorney. The State’s Attorney said they examined the possibility of the death penalty, but after consulting with Fox’s parents, they decided not to:

Kevin and Melissa Fox strongly expressed the wish that their daughter’s brutal and callous killer endure the torture of breathing every last breath of her miserable existence within the cold, damp walls of an Illinois prison cell.

More than six years after Riley’s death, these parents seek the same certainty and closure in their personal lives that the citizens of Will County demand of their justice system. Today’s guilty plea eliminates all avenues of appeal and guarantees that Scott Wayne Eby will never go free to attack another innocent child.

Eby is currently serving his life sentence at the Pontiac Correctional Center, where he was admitted in 2006, public records show. The Pontiac Correctional Center is a maximum security prison for men in Pontiac, Illinois, established in 1871, which currently has an inmate population of 1,065. Due to Eby’s conviction in the murder case, he is unable to appeal and will live the rest of his life in prison.

Eby was already in prison when the DNA was compared

Eby was already in prison with a 14-year sentence for raping his sister in 2005 when the FBI investigated his involvement in the murder of Riley Fox, the Chicago Tribune reported. After receiving a tip, FBI agents investigating the Riley Fox murder decided to interview Eby in May 2010 and asked for a DNA sample.

Several days after the request, Eby wrote a 10-page confession and wrote that he wanted to take the “cowardly way out,” the Chicago Tribune reported. He said that he deserved to be tortured and killed and that he did not understand “how my wires got crossed.” He blamed drug and alcohol abuse and insecurities for his actions and wrote: “I know that I am the lowest type of lowest mud on earth.”

Eby tied a sheet around her neck and tried to hang herself. He wrote in his letter that he had a “reasonably normal childhood” and that his parents were very good to him. “My parents did not raise a monster, I became one over the years and it is no one’s fault but mine,” he wrote, according to the Tribune. He added, “Keeping a secret like that within yourself is the very essence of your being day after day.”

Riley Fox’s cause of death

On June 6, 2004, the life of the Fox family changed forever. That weekend, Melissa, then 25, and a group of friends participated in the AVON Walk for Breast Cancer in Chicago, where she stayed for two nights, the longest time she had been away from her children. . Kevin stayed home with the kids.

Melissa adored Riley and appreciated the time she spent with her little girl. “She had this perfect black hair and a perfect round little face and blue eyes,” said Melissa. “She was fun. She was stupid. She was just very talkative, and she was friendly to everyone she knew. She was just a sweetheart. Riley looked a lot like Melissa, ”said Jillian Garrelts, Melissa’s friend. “She was a brave and daring girl. She … could be a little princess … But she … she was a daddy’s girl, kind of a tomboy [who she] loved to fish … and she wasn’t afraid of getting dirty. ”

While his wife was in Chicago, Kevin, then 27, and the children spent Saturday afternoon making posters in anticipation of celebrating Melissa’s walk to the finish line, where they planned to meet her in the morning. following. But early Sunday morning, Tyler woke Kevin up to tell him that Riley was missing.

Not thinking that it was a true emergency, Kevin looked across the house and into the backyard. Then after about 30 to 40 minutes, Kevin called the police non-emergency number. He reported that he found the front door open and Riley’s yellow blanket still on the couch, where she had been sleeping.

Meanwhile, in Chicago, Melissa and her friends were nearing the end of their walk when she called her husband to check in. He sounded so surprised. I knew right away that something was wrong, ”said Melissa. “He just said, ‘Riley is gone,’ and I immediately fell to the ground and the phone fell from my hand.”