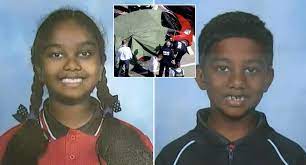 A close friend of the mother suspected of killing herself and her two children in a horrific car fire said “everything was perfect” before the tragedy.

Sam Revington said he had visited the ‘happy’ family at their home in Canning Vale in south Perth just days before the incident.

Abiyah, 10, and Aiden Selvan, eight, died in a car fire along with her mother Selvamma Doreswamy, 40, at the John Graham Reserve in Perth on Monday.

Revington said the family, who moved to Perth from Melbourne in 2015, were content with life in the western state.

‘We couldn’t find any reason for this to happen. They had a good life. She was a lovely lady and he is a good man,” she said of the couple.

The children’s devastated father, Selvan Govindhan-Vairavan, was due to land in Perth on Wednesday night.

He received the life-changing news while he was flying to the United States, where he intended to visit his brother.

Both he and his wife worked at Fiona Stanley Hospital, where Ms. Doreswamy was a nurse and Mr. Govindhan Vairava was a senior anesthesia technician.

The shocking tragedy has shaken the tight-knit community of Canning Vale, with friends describing the family as ‘happy’ and ‘normal’.

The locals will offer their support to Mr. Govindhan-Vairavan as he tries to process the loss of his dear wife and his two young children.

A memorial was installed at Providence Christian College Nursery School as tributes continue to pour in for beloved students.

Devastated friends have left bouquets, photos and tennis balls in honor of the family at a makeshift shrine outside the school.

Handwritten tributes to the two brothers taken too soon were posted outside a building on campus, with many vowing to ‘remember’ the children forever.

‘You inspired me (in) many ways, you are a beautiful person. Always shining bright and being adorable,’ read a card Abiyah had left.

Another friend described the 10-year-old as the “brightest light in the world”, while a student said they would “miss” Aiden.

Principal Bill Innes was forced to deliver the heartbreaking news to students on Wednesday, something he said “you could never be ready for.”

The mother and her two children were discovered in a burnt-out red Honda Jazz in a Coogee car park in south Perth at around 11:45am on Monday by emergency services responding to reports of a vehicle on fire.

Police said Tuesday they were treating the deaths as a murder-suicide, and while detectives hadn’t ruled out other alternatives, it was “very, very unlikely that there was a third party involved.”

Major Crimes Inspector Quentin Flatman said the married couple had a “normal, healthy and happy relationship” and Mr Govindhan Vairavan could not understand his wife’s actions.

“His reaction from him was what we would all expect under the circumstances,” Det-Insp Flatman said Tuesday.

Detectives were seen going back and forth to the family’s well-kept home Tuesday as mourners left tributes in the parking lot and the trio was discovered.

Police continue to investigate whether the fire was the sole cause of their deaths.