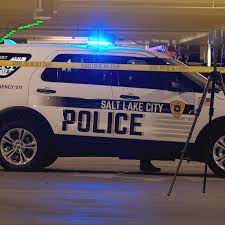 Who is Shawn Christopher Sturgeon ?

A Utah man ran over his wife in a Salt Lake City airport parking lot, killing her after they returned from vacation, police said.

Shawn Christopher Sturgeon, 38, was charged with motor vehicle manslaughter after he struck his wife, Charlotte Sturgeon, 29, on the second level of a parking lot at Salt Lake International Airport on Monday, police said.

“Shortly after the accident, Sturgeon drove the vehicle, with his critically injured wife inside, to the airport parking payment booths where he called for help,” Salt Lake City police said in a statement. “This incident occurred shortly after the couple returned to SLC from a vacation.”

Charlotte Sturgeon was rushed to a hospital, where she later died, police said. Police did not release a suspected motive in the incident, which is being investigated as a homicide.

Shawn Christopher Sturgeon was charged with auto manslaughter after he hit his wife, Charlotte Sturgeon.

The incident occurred shortly after the couple returned to Salt Lake City from vacation.
Sturgeon remained being held without bond early Tuesday at the Salt Lake County Metropolitan Jail, where he is charged with Automobile Manslaughter: Criminal Negligence DUI Alcohol/Drug, online records show. It is not clear if he has retained an attorney who can comment on his behalf.

“No further information on this case will be released,” Salt Lake City police said.

The couple’s last address on record is in Taylorsville, KUTV reported.

The incident took place on the second level of a parking lot at Salt Lake International Airport on Monday.

Under Utah law, a person can be charged with motor vehicle manslaughter if the driver operates a car in a “negligent manner causing the death of another person” with a blood alcohol content above the state limit of 0.05.

Operations at the airport were not affected by the incident, police said.