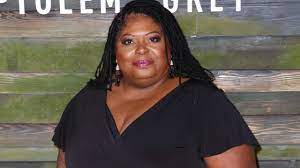 General Hospital star Sonya Eddy has died at the age of 55.

The actress, who played Epiphany Johnson on the beloved soap opera, died Monday night, and her friend Octavia Spencer confirmed the news.

“My friend @sonyaeddy passed away last night,” she wrote on Instagram alongside a photo of Eddy.

“My thoughts and prayers are with her loved ones, friends, and fans!”

Fans and famous faces shared their condolences in the comments below, while offering their support to Spencer.

Nina Parker wrote: ‘I’m so sad to hear this. Sending you love.’

One fan posted: ‘OMG! Very sad. I love Sonya and enjoyed every minute she was on the screen.

I am very sorry for your loss. May he rest in eternal peace.

“The General Hospital will not be the same without her,” agreed another. “She was a beautiful woman inside and out.”

Her cause of death has not been confirmed.

Eddy began his career on stage in the early ’90s, before coming to the small screen in 1995, and has since appeared in Married… With Children, Gilmore Girls, Crazy Ex-Girlfriend, Mike & Molly, and Beverly Hills. , 90210.

She was a staple of the ABC soap opera General Hospital, debuting as Epiphany in 2006.

He appeared in over 500 episodes alongside Kent King and Steve Burton, before reprising his role in the spin-off General Hospital: Night Shift.

In addition, he has delighted moviegoers at Barbershop, Coach Carter, Bad News Bears, and Seven Pounds, among many others.

In addition to acting, Eddy had trained as a licensed vocational nurse and had previously used her platform to support healthcare professionals.

In February, she announced that she would lead a new campaign to award scholarships to nurses, to help create a new generation and give those already in the field a “well, well earned break.”