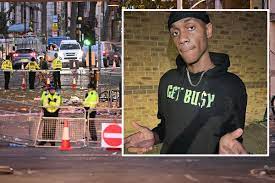 A teenager has been arrested on suspicion of murder after a rapper was stabbed to death at Notting Hill Carnival in October.

The 18-year-old man was arrested after turning himself in to police on Tuesday. He remains in custody.

Officials say they still need to track down another man whose image, captured on CCTV, has been published.

Detective Inspector Laura Semple, a crime specialist, said: ‘Do you know who this person is? It was caught on security cameras at the Carnival and we still need to locate it urgently.

‘If he can help or has any information, no matter how small, about Takayo’s murder, please come over.’

Mr. Nembhard, a Bristol artist, was killed while there was a crowd of several hundred in the immediate vicinity.

He was attacked in Ladbroke Grove, under the Westway flyover. He was taken to the hospital where he died.

The cause of death was a stab wound to the femoral artery in the right groin.

A 20-year-old woman was also arrested in Islington on suspicion of aiding a criminal.

A 17-year-old was arrested in Bristol on October 22 on suspicion of the murder and was later released on bail pending further investigation.