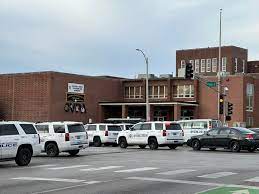 At least three people were killed in a shooting at a St. Louis, Missouri, high school on Monday morning, including the suspect, who yelled, “You’re all going to die!” when he opened fire on campus, authorities and witnesses said.

The male suspect, whose identity was not released but is believed to be in his 20s, was shot inside Central High School for the Visual and Performing Arts, part of the St. Louis Public Schools, the St. Louis Post Dispatch reported.

A woman and a teenage girl were also killed in the shooting, which left seven people injured, the newspaper reported. Their identities have not been revealed.

The students were evacuated with their hands in the air after gunshots were heard shortly after 9 a.m. on campus, Fox 2 Now reported.

Math teacher David Williams told the Post Dispatch that the principal walked over to the speaker and said the code word that indicates there is a shooter in the building.

Williams heard gunshots outside his classroom, where he shot out one of the windows in the door. He told the Post Dispatch that he heard a man say, “Everyone is going to (expletive) die.”

Ninth-grader Nylah Jones told the newspaper that she was in math class when the gunman fired into the room from the hallway. The students gathered in a corner of the classroom and tried not to move when the shooter banged on the door, she said.

When they locked themselves in, the kids didn’t think it was because of an actual shooting, he said.

Senior Taniya Lumpkin was in speech and debate class when a staff member told them to lock the door, but “they didn’t know if it was real or not.”

“Next thing you know, we just heard gunshots,” Nylah said. “First single shots rang out, then several, then a single one again.”

Teacher Michael De Filippo told the newspaper: “Once you heard the boom, all the giggling and giggling in the back of the room stopped.”

Taniya Gholston, 16, said the assailant’s gun eventually jammed and she heard him say something about being “tired of this damn school,” the Post Dispatch reported.

Ja’miah Hampton, also 16, was in singing class on the fourth floor when she heard gunshots on the third floor.

“I heard a big one, and then there were so many that I stopped counting,” she told the newspaper. “I’m confused, why are people so cruel?”

Dakota Willard, 14, who attends the Collegiate School of Medicine and Bioscience in the same building, said she saw a girl lying on the ground.

“What I saw was traumatizing,” Willard said, adding, “I’m fine. I don’t need any special help.

Parents were notified to go to the Gateway STEM at 5191 McRee Ave. to meet with their children.

A boy was later seen comforting his mother.