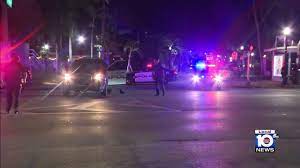 Who is Theon Lawson ?

Miami Beach authorities closed a section of the entertainment district overnight after saying a suspect fled a stolen car.

Officers set up a perimeter near Alton Road and 4th Street to search for this man and eventually located him.

This man was identified as Theon Lawson, 21 years old.

Mugshot of Theon Lawson, 21. (Miami-Dade County Correction)
He was arrested on multiple charges including aggravated robbery, breaking and entering and non-violent resisting arrest.

Police said he was driving without a valid driver’s license.