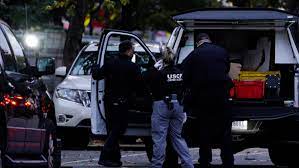 A Georgia man was arrested on weapons charges Wednesday after police say they found two pistols and a shotgun in a pickup truck he was driving in Washington, D.C., with plans to “turn documents” over to the Supreme Court.

U.S. Capitol Police said they have arrested Tony H. Payne, 80, of Tunnel Hill, who is facing three charges: unregistered firearm, unregistered ammunition and carrying a handgun without a license.

Authorities said they first noticed a vehicle illegally parked on Capitol grounds and then arrested Payne after they alleged he admitted to having firearms in the truck. Weapons are prohibited on the Capitol grounds.

A hazardous incident response team conducted a more detailed search of the truck after a pipe and containers were found inside, Capitol Police said. They later said the items did not pose a threat.

Police said they detained Payne and his two companions, another man and a woman, during the search. Capitol Police said in a news release: “People told our investigators they were here to serve documents on the Supreme Court of the United States,” which is near the Capitol.

The man and woman who were with Payne, who were not publicly identified, were released without charge, police said.

Payne could not be reached for comment. The Supreme Court did not immediately respond to a request for comment.

Concerns swirled and additional security measures were put in place this year to help ensure the safety of Supreme Court justices amid heightened tensions over the court’s ruling that overturned Roe v. Wade.

In June, a man armed with a gun, a knife, pepper spray and burglary tools was arrested near Judge Brett Kavanaugh’s home. Nicholas John Roske pleaded not guilty.