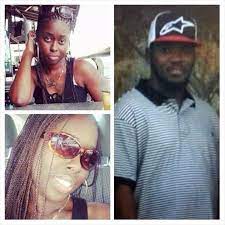 The family of a missing woman held a news conference Wednesday to remind the public that they need help finding their loved one.

Trukita Scott, 24, was reported missing when she failed to pick up her children from day care on June 25. She was last seen on surveillance video leaving her job at a U-Haul store in West Park.

Almost a week later, her car was found in Liberty City.

Scott’s family suspects that her ex-boyfriend, Carl Watts, had something to do with her disappearance. He turned himself in to police on an unrelated federal arrest warrant, but has not been officially linked to Scott’s disappearance.

“I think it has some connection to his disappearance,” Kenegral Allen Scott said.

Watts was never arrested for Scott’s disappearance. On Saturday, Watts, 45, was accused of stabbing his wife, Sandel Harris, in Miami. Authorities said he fled. On Sunday, Watts offered Harris money to have the stabbing charges dropped, and when she refused, he fatally shot her in public, according to her arrest report. She was 30 years old.

Harris died at the Michael-Ann Russell Jewish Community Center, 18900 NE 25th Ave. He was shot by Watts while her daughter was taking swimming lessons, police said. The convicted felon allegedly stood over her in the pool area after she collapsed and continued to fire at her until she ran out of cartridges, police said.

Watts ran away shortly after 2 p.m., but a private security guard held him at gunpoint until officers arrived, police said. Harris’s daughter, who was learning to swim at JCC during the murder, was born from a previous relationship, police said. Harris and Watts had no children together.

Watts had a history of drug dealing, prostitution, grand theft, armed robbery and possession of stolen property in Miami-Dade County in the 1990s.

In 2003, officials charged him with organized fraud, grand theft, and depositing checks with fraudulent intent. After his conviction, Watts was in prison from February 4, 2004 to July 2, 2005 when he escaped, according to the Florida Department of Corrections.

Watts was returned to custody on April 10, 2006, and was released by corrections officers on July 22, 2007, FDOC records show. In December 2007 he was arrested for kidnapping and assault. His last arrest was in 2017 for gambling.

Watts faces charges of second-degree murder with a weapon and possession of a firearm by a convicted felon. He appeared in court on Monday. Correctional officers held him without bond at the Turner Guilford Knight Correctional Center.