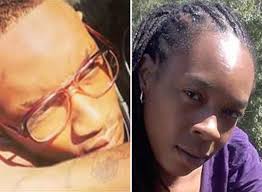 Christopher Jenkins, 28, was involved in a fight with his 44-year-old mother, Vanessa Jenkins, outside their Crown Heights home around 9:50 p.m. on Oct. 12, when the woman pulled out a gun and shot her son twice in the head, according to police and a criminal complaint.

When police arrived at the scene, the injured man yelled, “My mother shot me, I’m dying,” according to the complaint, which cites body camera footage of a lieutenant.

Cops investigate the scene of the shooting where the mother shot her son twice in the head.

He was rushed to Kings County Hospital Center in critical condition and kept on life support until he succumbed to his injuries on Oct. 24, police and the complaint said.

His death has been ruled a homicide, according to authorities.

She is claiming self-defense, with her son, a suspected Crips gang member, allegedly strangling her before she shot him, police sources told The Post.

It is not clear what the dispute that turned deadly was about.

The victim had 16 prior arrests, including for robbery, the sources said.

The mother was ordered held on $500,000 cash bond or $1 million bond during her arraignment, the Brooklyn District Attorney’s Office said.

A spokesman for the district attorney’s office said he could not comment Tuesday on whether the charges against the mother would be updated now that her son had died, as that would be handled by a grand jury.