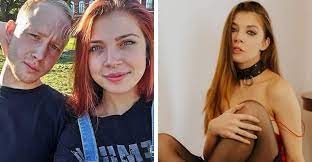 Veronika Troshina is a Russian actress who is reportedly wanted by the police in Bali, Indonesia, for violating the rules of public indecency in the country. She apparently filmed a sexual escapade with her boyfriend Mikhail Morozov on a holy mountain at the tourist destination last year.

The young p * rn actress graduated from school in 2017 and since then, she has been a familiar face on social media in the p * rnographic domain. She usually uses the nickname Mihanika to share spicy content with over 550,000 subscribers.

Interestingly, “Mihanika” is a combination of her first names and her partner.

Her boyfriend Mikhail hails from the same city, Knewz reported.

Troshina also hails from the remote Russian city of Rybinsk, about 165 miles northeast of Moscow.

After the video appeared, Troshina shared it on social media and promoted it through her Twitter account.

It was widely shared and viewed more than 1.2 million times. However, the video drew the ire of local police in Indonesia, who are now looking for ways to reach the p * rnstar and her boyfriend. If arrested and charged, the two can face up to three years in prison.

Veronika Troshina and Mikhail Morozov Video
She first shared a glimpse of her mountain adventure on TikTok, captioning it as: “You saw me somewhere.”

The video shows her Covid-19 mask under her chin as she engages in sexual acts with her boyfriend, The Sun reported.

Meanwhile, the Bali police have launched an elaborate search to find the couple, although it is widely believed that the couple have already returned home.

“Our officer found the location, specifically along the Mount Batur hiking trail, just above the Pasar Agung temple. We are coordinating with immigration to find out if the affected people are still in Bali, ”Bangli District Police Chief I Gusti Agung Dhana Aryawan told The Sun.

The X-rated video was filmed at Mount Batur, near Pura Bature, one of the holiest Hindu temples in the country. It was also uploaded to P * rnhub, where it racked up over a million views before being removed.

She also posts obscene videos and photos on Instagram and on her OnlyFans accounts. Troshina is also quite popular on Twitter and TikTok.