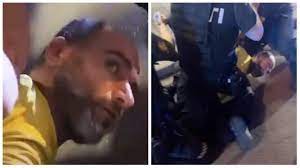 The Norwegian royal family today paid their respects to the victims of last night’s shooting at a gay nightclub in Oslo, in which two people were killed and 21 injured.

The terror suspect accused of killing two people and injuring 21 more at an Oslo gay bar last night has been identified as a 42-year-old former plumber born in Iran.

Zaniar Matapour was born in Iranian Kurdistan before arriving in Bergen, Norway as a refugee at the age of 12.

He was charged this morning with two murders, attempted murder and terrorism after the homophobic terrorist attack on the LGBT+ London Pub city center.

Flowers and flags were placed outside a restaurant, Eilefs Landhandleri, just 70 yards away from the scene of the London Pub attack on Rosenkrantz Gate Road last night.

The royal husband and wife looked solemn as they paid their respects to those who lost their lives or were injured. Crown Prince Haakon was seen hugging a person wrapped in a colorful flag.

They were also joined by their 16-year-old son, Prince Sverre Magnus of Norway, at the makeshift memorial.

Norway’s king did not attend along with the crown princess and prince, but instead released a statement following the fatal attack in the early hours of Saturday morning.

He said: ‘My family and I are horrified after last night’s shooting in Oslo city center.

“We empathize with those affected and send warm thoughts to those who are scared, restless and grieving.”

Joining the royals were political leaders from Norway, including Prime Minister Jonas Gahr Støre, Minister for Justice and Public Security Emilie Engel Mehl and the leader of FRI, the Association for Gender and Sexual Diversity, Inge Alexander Gjestvang.

Oslo was due to hold its annual gay pride parade later on Saturday, but organizers canceled the event over fears of possible “copycat” attacks.

Oslo Pride planners wrote on Facebook this morning: ‘Oslo Pride has received clear advice and a recommendation that the parade, Pride Park and any other Oslo Pride related events be cancelled.

“We will follow the recommendation of the police and take care of each other,” added main organizer Inger Kristin Haugsevje.

The Norwegian Police Security Service (PST) investigated Matapour just a month ago but decided he was “not an imminent threat”, Norwegian national broadcaster VG reported.

The head of the PST, Roger Berg, told a press conference this afternoon: ‘In May, the PST conducted interviews with the [alleged] perpetrator in relation to the fact that he had shown an interest in statements perceived to be in violation of the Islam.

‘It was not considered in these conversations that the [alleged] perpetrator had any intention of violence.’

The security services have raised the terrorist threat from Level 3, described as ‘ordinary’. at level 5 of ‘extraordinary’.

The PST stated that the level 5 warning does not imply any special requirements among the population beyond additional ‘vigilance’ and ‘a low threshold for contacting the police’.

Matapour, a high school dropout with a long history of mental health problems, was sentenced to 10 months in prison as a teenager after he was linked to a stabbing at a high school prom.

He was acquitted by the Court of Appeal, according to court documents reviewed by Norwegian outlet NettaVisen.

French President Emmanuel Macron criticized the “barbarism of the Islamist terrorist” in a tribute tweet posted today at lunchtime.

After the deadly melee in central Oslo last night, a man was filmed being shot down by police with the help of revelers.

One woman described that she had to play dead to avoid being shot by the shooter.

The other site targeted during the attack around 1:15 am today was the Herr Nilsen jazz club next door, where revelers described being hit with flying glass shards.

She said: ‘There was a woman who knocked me down and told me that she had to play dead.’

The man then fired at the table directly behind her. She escaped the London Pub unharmed.

Police lawyer Christian Hatlo said: “Our general assessment is that there is reason to believe that he wanted to cause great fear in the population.”

We need to review your medical history, if you have any. It is not something that we are aware of right now.

The Oslo Police District confirmed last night: ‘Two people have been confirmed dead in the shooting episode. There are several seriously injured.

Oslo University Hospital said it had gone on red alert after the shooting.

Olav Roenneberg, a journalist for the Norwegian public broadcaster NRK, said he witnessed the shooting.

‘I saw a man arrive at the site with a bag. He picked up a weapon and started shooting,’ Mr Roenneberg told NRK.

‘First I thought it was an air gun. Then the glass of the bar next door was shattered and I understood I had to run for cover.’

Police inspector Tore Soldal said two of the shooting victims died and 10 people were being treated for serious injuries, but none of them was believed to be life-threatening.

Prime Minister Jonas Gahr Stoere said in a Facebook post that ‘the shooting outside London Pub in Oslo tonight was a cruel and deeply shocking attack on innocent people’.

He said that while the motive was unclear, the shooting had caused fear and grief in the LGBTQ community.

‘We all stand by you,’ Mr Gahr Stoere wrote.

Christian Bredeli, who was at the bar, told VG he hid on the fourth floor with a group of about 10 people until he was told it was safe to come out.

‘Many were fearing for their lives,’ he said. ‘On our way out we saw several injured people, so we understood that something serious had happened.’